The wit and wisdom of Robert A. Heinlein's character, Lazarus Long.

"Not only America's premier writer of speculative fiction, but the greatest writer of such fiction in the world … [Heinlein] remains today as a sort of trademark for all that is finest in American imaginative fiction."
- Stephen King

"There is no other writer whose work has exhilarated me as often and to such an extent as Heinlein."
- Dean Koontz

"One of the most influential writers in American Literature."
- The New York Times Book Review

"Heinlein wears imagination as though it were his private suit of clothes."
- The New York Times

"Heinlein… has the ability to see technologies just around the bend. That, combined with his outstanding skill as a writer and engineer-inventor, produces books that are often years ahead of their time."
- The Philadelphia Inquirer

"One of the grand masters of science fiction."
- The Wall Street Journal 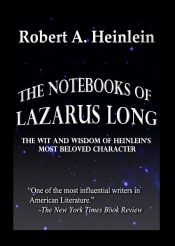