A project-filled introduction to coding that shows kids how to build programs by making cool games.

Scratch, the colorful drag-and-drop programming language, is used by millions of first-time learners worldwide. Scratch 3 features an updated interface, new programming blocks, and the ability to run on tablets and smartphones, so you can learn how to code on the go.

In Scratch 3 Programming Playground, you'll learn to code by making cool games. Get ready to destroy asteroids, shoot hoops, and slice and dice fruit! Each game includes easy-to-follow instructions with full-color images, review questions, and creative coding challenges to make the game your own. Want to add more levels or a cheat code? No problem, just write some code.

Learning how to program shouldn't be dry and dreary. With Scratch 3 Programming Playground, you'll make a game of it! 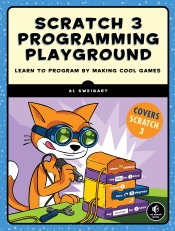